Each year, the Oregon Veterinary Medical Association and the Animal Health Foundation of Oregon honor animals who, through unselfish and courageous accomplishments, exemplify the affection, loyalty, security, public service, and value of the human-animal bond.

The Oregon Animal Hall of Fame™ is the second longest running awards program among veterinary organizations in the country. Since the program was started in 1988, the OVMA and the AHFO have recognized dogs, cats, an animal welfare group, a horse therapy group, horses, and one llama! Animals are inducted into the Oregon Animal Hall of Fame™ during the Oregon Veterinary Conference in Corvallis. See below for a list of past inductees. 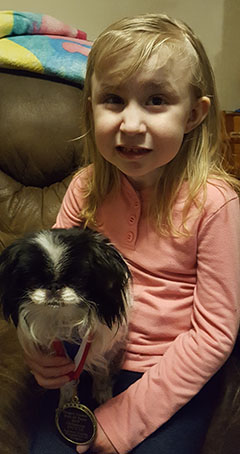 This award recognizes animals who have provided a benefit to their human companions or their community.

Dixie, a 9-year-old female Japanese Chin, is Kinsley Cook's best friend. And theirs is a very special relationship.

At the age of nine months, Kinsley was diagnosed with an inoperable brain tumor. She also has endured multiple surgeries, which has left her blind and with limited use of her left side. Yet she is undeterred and displays a remarkable resilience for a young girl who has experienced such significant health concerns. Kinsley is a funny and active 5 year old who enjoys interacting with her older brother, Bailey, and who relishes playing with her toys, cracking jokes, and, well, pretty much doing what young girls do.

This year, Kinsley started a new adventure: kindergarten. And she loves it, attending school about three days a week.

Kinsley also undergoes weekly physical therapy and frequently visits Oregon Health Sciences University in Portland for chemotherapy treatments and continued diagnostics. Unfortunately, because of her medical treatments, Kinsley often doesn’t feel well. But through her toughest moments, there is Dixie, with all of her spunkiness, watching over her best friend and lifting Kinsley’s spirits.

The two are nearly inseparable. Kinsley pushes Dixie around the house in boxes, dresses her up, invites her into the bathtub, and, when bedtime calls, snuggles with her dog, where both of them soon fall asleep. Dixie’s patience with and affection for Kinsley is endless.

When Dixie is by her side, Kinsley’s smile is contagious. Dixie elicits pure joy in her best friend, offers unconditional love, and is the perfect companion.

The relationship between Kinsley and Dixie exemplifies the strength and value of the human-animal connection. 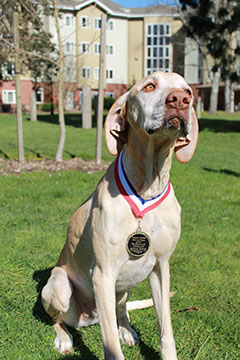 View Stetson's induction at our 2019 ceremony.

Stetson is an 8 year old Binting Yellow Labrador Retriever who is certified as a therapy dog. As a valuable member of the joint crisis team for Crook, Deschutes and Jefferson counties, this remarkable dog travels to many schools in the area to offer his brand of love, understanding, compassion and sympathy to many.

For example, a group of middle school football players were grieving the sudden loss of one of their coaches shortly after the season had ended. They were in a tight circle with no way to enter. Stetson found a small opening and entered the circle. He worked counter-clockwise, stopping to greet each student and adult. He was never in a hurry.

Some of the kids buried their faces in Stetson’s fur and sobbed. Some hugged this lovable dog. Others petted Stetson and talked to him about their memories of their coach. The kids remember him helping to make a difficult day a little easier to bear. Stetson had made a difference in their moment of grief.

That same day, a county crisis coordinator was observing Stetson at work to prove her conviction that having a dog available during a crisis neither really mattered nor made a difference. But after watching Stetson work that day in the safe room—a place for all to come together to start the healing process following a tragedy—the coordinator reached a different conclusion: that Stetson provided a needed and amazing service, and that she wanted a dog available for all of her crisis calls.

Stetson regularly visits a young boy at a local middle school who infrequently speaks—and when he does speak, the middle schooler uses one syllable words. This student loves Stetson, and their affection for one another is obvious. When they first met, the student didn’t utter a word. Today, this same student can say "Stet-son," a two syllable word, and he can give the dog simple phrase commands. This therapy dog brightens the boy’s day, with each visit ending with a kiss from Stetson!

These are but a few of the many stories about Stetson. According to owner Betty Nitschelm, it didn't take long to recognize that Stetson was born to share his gifts. Stetson promotes the rich connection we know as the human-animal bond.

Recognizes animals who have saved or preserved a life.

Recognizes animals who have provided a benefit to their human companions or their community.