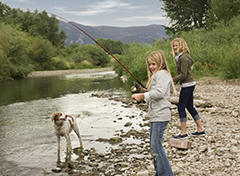 Salmon poisoning disease (fish disease) is a potentially fatal condition seen in dogs who have ingested certain types of raw fish found in the Pacific Northwest from San Francisco to the coast of Alaska. It is most prevalent from northern California to the Puget Sound. It is also seen inland along the rivers of fish migration.

Fish That May Be Infected

Salmon, trout, and other fish such as the lamprey, sculpin, redside shiner, shad, sturgeon, candlefish and the large-scale sucker who spend their lives in coastal streams and rivers in the Pacific Northwest can be infected with the organism Neorickettsia helmonthoeca.

The life cycle begins when the eggs of the fluke Nanophyetus salmincola are released in the feces of the host mammal or avian. Those eggs may find their way into a freshwater snail, Oxytrema silicula, found only in coastal streams and rivers. Inside the snail these forms reproduce many times and encyst in fish tissues, which, if eaten, can cause illness in canines.

Symptoms To Watch For

If not treated, salmon poisoning disease is usually fatal within 2 weeks after exposure. The symptoms of salmon poisoning disease are similar to other gastrointestinal diseases such as canine parvovirus. If infected, your dog would likely show some or all of the following symptoms about 6 to 10 days after ingesting fish which were carrying the bacteria. Symptoms may be of variable severity but generally consist of:

The disease is diagnosed with analysis of a fecal sample to detect the parasite's eggs or by detecting the bacteria through a needle sample from a swollen lymph node. Treatment involves administration of an antibiotic to kill the bacteria and a dewormer to kill the parasite. If a dog is vomiting at the time of evaluation, it may need to be hospitalized for IV fluid administration. Many dogs respond to treatment quickly, showing improvement in just a few days. Once recovered, many dogs have a permanent immunity to the strain they were infected with. However, infection with an alternate strain can occur so precautions should still be taken.

The best treatment is prevention.