Spay or Neuter Your Pet

Sadly, each year in the US more than 15 million dogs and cats are euthanized because of overpopulation.

Altering pets through spay/neuter surgery helps prevent the unwanted birth of animals that may be difficult to place into good homes.

The spaying and neutering of pets can also reduce the incidence of sex-hormone related diseases.

Roughly one-fourth of all dogs in shelters are purebred. Pet owners who are considering not altering their purebred pet are encourage to consider this fact.

Will my dog or cat be a "better" pet after altering?

Yes. In addition to the benefits of not having heat periods and unwanted offspring, the animal's tendency to roam is decreased. Most pets become less aggressive toward people and other animals. Spaying or neutering your pet will not alter the pet's training or its ability to work or hunt.

What are some of the other known advantages of having my pet altered? 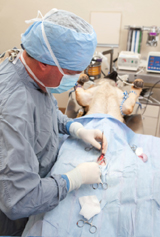 What is actually done in a spay or neuter procedure?

In both cases, the animal is given general anesthesia so that it cannot feel any pain or discomfort.

Neutering refers to the castration of a male animal. It is a surgical procedure in which both testicles are removed. Neutering requires considerably less time and equipment than a spay surgery.

How old should my pet be before surgery? 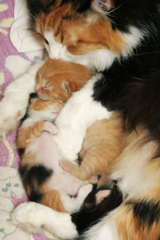 Should the female have a heat period or a litter before being spayed?

Is it safe for a dog or cat to be spayed when she is in heat or pregnant?

Females in good health can have the surgery done when they are in heat or pregnant. Talk with your veterinarian as to what is best for your pet.

Isn’t it unnatural to deprive my pet of a sex life?

No. Dogs and cats have sex strictly to satisfy hormone-induced instincts, not for pleasure.

Why shouldn’t I just keep my female dog or cat confined while she is in heat?

Will spaying or neutering my pet cause it to become fat and inactive?

No. Weight gain is due to being fed more calories than the animal uses. Be aware of the quantity of food give your pet, and follow feeding instructions as given by your veterinarian or on pet food labels. Older pets need fewer calories than younger ones because they tend to be less active and are no longer growing. Regular play and exercise, along with a proper diet, are the keys to keeping your pet in shape.

I can't afford to spay or neuter my pet. Is there a source for financial assistance?

As part of their commitment to the health of animals and our communities, many veterinarians participate in reduced-cost or subsidized cost spay/neuter clinics or accept spay/neuter coupons from local humane organizations, so contacting your veterinarian is a good first step. Other resources and suggestions for paying for veterinary care