Be on the lookout for waters that look suspicious — foamy, scummy, thick like paint, pea-green, blue-green or brownish red, or bright green cells suspended in the water column. When in doubt, stay out!

Health advisories for toxic algae levels have been issued for the following bodies of water in Oregon.

Pets should avoid contact with the affected water. People should avoid swimming and high-speed water activities, such as water skiing or power boating, in areas of the lake where blooms are identified. Although toxins are not absorbed through the skin, people who have skin sensitivities may experience a puffy red rash. Drinking water directly from areas affected by a bloom is especially dangerous. Toxins cannot be removed by boiling, filtering or treating water with camping-style filters.

Advisories are lifted when values fall below those that can cause human illness. Illness in pets can be seen at lower values so please continue to exercise caution at these areas:

Children and pets are particularly susceptible to this toxin

Exposure to toxins can produce symptoms of numbness, tingling and dizziness that can lead to difficulty breathing or heart problems and require immediate medical attention. Symptoms of skin irritation, weakness, diarrhea, nausea, cramps and fainting should also receive medical attention if they persist or worsen. Children and pets are particularly susceptible. 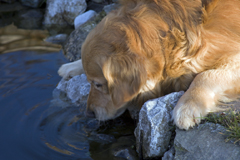 Swallowing or inhaling water droplets should be avoided, as well as skin contact with water by humans or animals. Drinking water from these bodies of water is especially dangerous. Oregon Public Health officials advise campers and other visitors that toxins cannot be removed by boiling, filtering or treating the water with camping-style filters.

Oregon Public Health recommends that people who choose to eat fish from waters where algae blooms are present should remove all fat, skin and organs before cooking since toxins are more likely to collect in these tissues. Additionally, public health officials advise that people should not eat crayfish or freshwater shellfish harvested from these bodies of water while this advisory is in effect.

A hazard for dogs

Dogs have become very sick and even died after swimming in and swallowing water affected by toxic algae. If you find thick, brightly colored foam or scum at a lake, pond or river, don’t let your pet drink or swim in the water. Avoid contact with the water, as toxins can be absorbed through the skin.

Exposure to toxic blue-green algae can result in:

If your dog goes into the water: