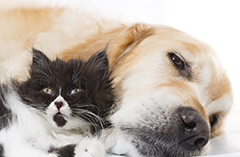 Rabies is an infectious viral disease that affects the nervous system. It is transmitted by a bite or saliva from a rabid animal.

Worldwide, about one person every 10 minutes dies of rabies, mostly in Africa and Asia. Although human rabies is relatively rare in the United States, where there are typically only a few cases per year, animal bites are very common. As a result, thousands of people each year receive rabies post-exposure prophylaxis, or PEP.

Avoid bats or animals that appear to be sick, flopping around, or behaving unusually, and keep your pets up to date on their rabies vaccinations.

Oregon law requires that unvaccinated pets that may have been in contact with rabid animals to be vaccinated and quarantined for 4 months (dogs and cats) or 6 months (ferrets), or euthanized. The contact animal, such as a bat, is considered rabid unless it is tested and is negative.

A Note on Travel

Please note that if you plan to travel with your pet to other states, or out of the country, the vast majority of destinations require a current rabies vaccination in order to allow entry to your pet. The State of Oregon requires that animals over 4 months old who are entering Oregon must have a current rabies vaccination. Our Travel section has more information on these requirements.

Why It's Very Important to Vaccinate Cats

Nationally, twice as many cats as dogs are reported to have rabies each year, which is why it’s important to vaccinate your cats for rabies. Cats are natural predators and may be attracted to bats, which could be rabid. Cats come into contact with bats far more often than other pets and, if not vaccinated, may have to be euthanized after such contact. 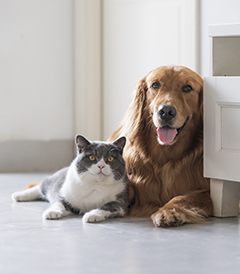 While the incidence of rabies is low, the disease is invariably fatal in horses. Because of this, and the risk to public health, the American Association of Equine Practitioners recommends rabies vaccinations for horses. Consult with your veterinarian about vaccination protocols for your horse.

While they can contract the disease, in the past 50+ years, no raccoons have tested positive for rabies in Oregon. Raccoons can, and do, contract canine distemper, and can display neurologic symptoms similar to rabies.

If You Are Bitten

If you are bitten by any animal—even a household pet—and especially if the bite is from a wild animal, such as a bat, it is important to clean the wound and then consult with your health care provider immediately.

If you are scratched or bitten by a bat, immediately clean the wound. If the bat has been captured, do not crush the bat or throw it away, as intact bats can be tested for rabies, which can help you avoid post exposure rabies shots (PEP).

According to the law, dogs, cats or ferrets that bite humans should be quarantined for 10 days. If any other animal bites a human, euthanasia and rabies testing of the animal is recommended.

Do Not Pick Up or Touch Bats

Bats play an important role in the ecosystem, especially in controlling insects at night. They are an important insect predator; they often eat mosquitoes and can catch over 1,000 tiny insects in an hour. Bats emerge from hibernation in early spring and remain active until late fall; they are most active in warm weather.

Most often, humans are exposed to rabies by picking up a what seems to be a sick or injured bat. If you find a bat during daylight hours, it is most likely unhealthy and should be avoided.

Anyone bitten by a bat should be vaccinated for rabies immediately if the bat is not available for testing. Cats increase the risk by playing with bats and taking them into homes.

If you are scratched or bitten by a bat, immediately clean the wound. If the bat has been captured, do not crush the bat or throw it away, as intact bats can be tested for rabies, which can help you avoid post exposure rabies shots.

Handling bats is not recommended, but if you must handle a bat, it should be done with sturdy gloves or an implement, such as a shovel. Direct hand contact with bats should always be avoided. Place the bat in a secure container and contact your county health authorities.

Video: How to Safely Catch a Bat in Your Home

Tips to Keep Your Family Safe