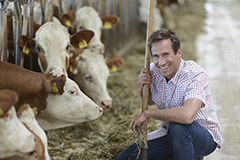 Antimicrobial resistance is only a threat to public health when humans are infected with a resistant organism that is difficult or impossible to treat. This is an issue seen more frequently with human pathogens transmitted between humans (such as extremely drug resistant tuberculosis, also called XDRTB, and MRSA). While outbreaks of resistant food borne pathogens have been reported, very few have been epidemiologically traced back to the farm. Even fewer have been specifically associated with a specific use.

While it is generally recognized that most concerns with antibiotic resistance arise in human medicine, concerns about antimicrobial infections in veterinary medicine are now being considered with increasing scrutiny.

The most appropriate use of antibiotics in animals is targeted, therapeutic use—just as we hope that most antibiotic use in people is well-selected, as narrow as possible, and discontinued as soon as possible.

Antimicrobials are generally used to prevent or treat infection in companion animals much like they are used in human medicine. For example, a physician or veterinarian might administer or prescribe an antimicrobial to treat skin, bone or systemic infections. They can be used before surgery to prevent postoperative infection. There appears to be a growing concern within the profession of antibiotic resistance, i.e., drug-resistant skin infections, urinary tract infections, and surgical site infections in companion animals. As in human medicine, this is limiting the treatments that can be used by veterinarians, as more and more antibiotics become ineffective.

In food production systems, healthy animals make healthy food, and veterinarians are on the frontlines when it comes to keeping our nation’s food supply safe. Advances in animal health care and management have greatly improved food safety over the years and have reduced the need for antimicrobials in food production systems. Nevertheless, antimicrobials are an important part of the veterinarian’s toolkit, and veterinarians agree that they should be used judiciously and in the best interest of animal health and public health.

The U.S. Food and Drug Administration (FDA) approves the use of antimicrobials for four purposes:

Note: At the 2019 Oregon Veterinary Conference, we will be taking a close look at the judicious use of antimicrobials in the Companion Animal and Food Production tracks.