At ceremonies held during the 2020 Oregon Veterinary Conference in Corvallis, the OVMA honored the following for their service to the veterinary profession and animals. 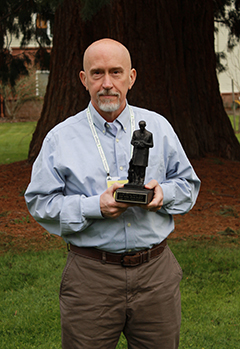 The Animal Welfare Award recognizes a veterinarian who has demonstrated outstanding compassion and/or developed programs that have been for the welfare of animals.

Dr. Kirk Miller is a clinical instructor of small animal primary care and shelter medicine at the Carlson College of Veterinary Medicine and a practicing veterinarian at the Oregon Humane Society. Dr. Miller has been an integral part of the Medical Learning Center at OHS when he began teaching a required course for fourth year veterinary students from Oregon State University shortly after the collaborative program began in 2005. He has been responsible for developing and innovating the two-to-three-week rotational course that provides experiential learning in a high-volume, high-quality shelter based medical center.

In these ensuing 15 years, Dr. Miller has provided oversight and guidance to this course, which has now graduated more than 1000 veterinary students. His influential and inspirational leadership has become a teaching model that has been replicated in a variety of ways at most veterinary colleges across the country. The course has been consistently ranked as a number one favorite by OSU CCVM students.

Dr. Miller provides consistency, quality and compassionate teaching to the students while helping each of them grow in their confidence and competence in the areas of surgery, medical exams, dentistry and high volume, high quality medical care to pets. The students utilize primary care skills including completing more than 40 surgeries, caring for dozens of hospitalized patients, and completing many physical examination and treatment plans.

In addition, he has also made scholarly contributions in the areas of research and published articles that advance the understanding and knowledge of important topics in our profession—such as the benefits of pedicle-tie spays to reduce the patient’s time under anesthesia. Dr. Miller is a regular speaker at national conferences, where he addresses advances in spay-neuter surgeries and tackles the important challenges with animal hoarding.

Outside of work, Dr. Miller, along with veterinary cardiologist William Rausch, are part of the Lost Creek Bluegrass Band, in which he plays the mandolin. 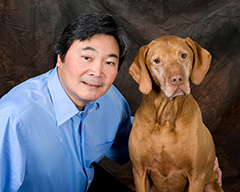 The Veterinary Service Award recognizes an individual, group or organization that has promoted the veterinary profession and/or the well-being of animals.

Two common threads have remained consistent throughout Dr. Takashima’s career as a practitioner and in his volunteer service in the profession—the value of high standards of care in medicine and the importance of the human-animal bond.

Dr. Greg Takashima was following his dream as a veterinary student at the University of Minnesota when he encountered a serious dilemma about whether to remain silent while his “surgery” dog was to be returned to the local shelter for euthanasia or to rescue the small dog against school policy. The dog had been purchased from the shelter and was the university’s property.

Dr. Gregg Takashima, who worked part time at the college and had keys to the ward where the dog was kept, liberated Freddy and brought him home.

Facing expulsion, Gregg was called before the Dean, Dr. Carl Osborne, and asked to explain why he stole university property. He told the Dean that the human-animal bond mattered—that it was an important part of the profession—and that he also had become rather fond of the dog. Gregg was not expelled and was able to adopt Freddy. A few years later, the school revised its policy and allowed students to adopt these animals.

Shortly after moving to Portland, he opened Parkway Veterinary Hospital in Lake Oswego in 1986. The solo practice grew into an eight-veterinarian business and today is part of Animal Care Group of Lake Oswego, with Dr. Takashima as CEO.

Accepting this award in absentia, Dr. Takashima said, “We are in interesting times, where the importance of collaboration and the ‘world view’ are more important than ever. We can no longer act alone as veterinarians, as an association, or as a profession. What we do impacts many, as we are impacted by what others do. While technology has helped our profession advance, just as it has with other professions, to remain relevant we must stay true to our values of personal compassion, pursuit of excellence, and understanding and embracing the value of the human-animal bond.”

2020 Practice Manager of the Year 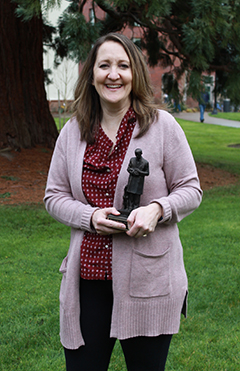 The Practice Manager Award salutes an individual who has exhibited exceptional professionalism in leading the practice.

What makes a veterinary practice a success? The veterinary TEAM is the answer.

For the past five years, Traci has successfully balanced the different elements of management, including time management, mediating conflicts with clients, and supporting team members. She is detail-oriented, has the necessary initiative to get things done, and an excellent customer service.

Traci’s high personal ethics sets important leadership standards and expectations for the team. As part of her role with Animal Dental Clinic, she organizes and coordinates continuing education events throughout the greater Portland community and in Bend. She additionally has continuous membership and active involvement in the local veterinary practice managers’ group.

Traci has also been instrumental in helping to grow the clinic from a two-doctor, two-staff practice to a three-veterinarian and nine-staff practice that sees cases referred from the entire Pacific Northwest. In conjunction with Dr. Jean Battig, the clinic’s owner, Traci was integral in the planning, design and implementation of a practice relocation into a free-standing dedicated clinic, with state-of-the-art dental and surgery equipment, including a cone-beam CT scanner.

Traci also maintains her CVT license and doesn’t hesitate to help out on the floor when the team is short-staffed. She is an exceptional ambassador for highlighting the veterinary technician’s role as a valued professional of the healthcare team. Prior to joining the Animal Dental Clinic team, Traci was a lead veterinary technology instructor at the Sanford-Brown program in Portland, and before that she served as the practice manager for Sorrento Animal Hospital in Tigard. 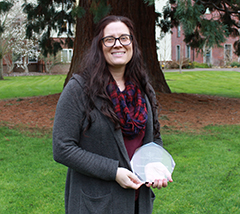 The Technician of the Year Award recognizes a staff person who has gone above and beyond the expected responsibilities of the practice to provide outstanding client and patient service.

The Veterinarian of the Year Award is awarded to a veterinarian who has made outstanding contributions to the profession through service.

At a November 2019 staff meeting at the Animal Dental Clinic in Lake Oswego, Practice Manager Traci Medeiros developed sudden cardiac arrest from ventricular fibrillation. Traci had no prior clinical symptoms or history of heart issues, but that evening she informed everyone she wasn’t feeling well, lowered her head, and collapsed to the floor, unresponsive and without a pulse.

Lisa Caton, a certified veterinary technician with the clinic, has always valued CPR training. In fact, she first learned CPR at the age of 10 from her father, a firefighter and first responder. Lisa right away recognized that Traci was in serious trouble and required immediate action and started to administer CPR.

Dr. Sarah Bonner, one of the board-certified veterinary dentists with the clinic, assisted Lisa with resuscitation efforts. In the meantime, another team member contacted emergency medical services. 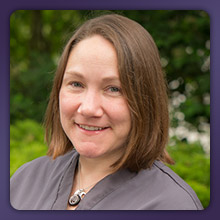 The first seven minutes of resuscitation efforts are the most critical. According to the CDC, for every 60 seconds that pass, chances of surviving drop by 10% without CPR or defibrillation. After just four minutes, brain damage begins to occur. After 10 minutes, it is unlikely that the individual can be saved.

It took 19 minutes for EMS to respond and take over resuscitation attempts, and the paramedics later commented on how impressed they were with the team’s resuscitation skills.

Today, Traci Medeiros is doing well—far better than expected. She did not suffer any loss of function, has made a full recovery, and has returned to work in her role as practice manager. All team members at Animal Dental Clinic have subsequently received certification in CPR.

Lisa Caton and Dr. Sarah Bonner are accomplished in their respective fields of veterinary dentistry. Each is passionate about the care they provide to their clients and patients and are equally dedicated to teaching others about enhanced standards of dentistry.

But perhaps their greatest accomplishment occurred that day in November of last year, when they saved a friend’s life.

We encourage practices to consider holding CPR training for their staff. You never know when it might save someone's life. 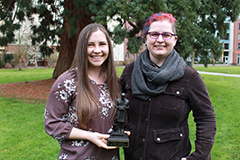 The President's Award is given at the discretion of the president to an individual or group who has made an exceptional contribution to the OVMA and veterinary medicine. Dr. White honored the OSU CCVM students en masse for their dedication and enthusiasm for the profession.

Veterinarian of the Year

Practice/Office Manager of the Year