Bovine spongiform encephalopathy (BSE), also known as Mad Cow Disease, is a chronic, fatal disease that affects the central nervous system of cattle. Caused by the formation of abnormally shaped proteins called prions, the disease's incubation period is long, ranging from 3 to 6 years or perhaps longer. First diagnosed in the United Kingdom in 1986, the disease reached its peak in that country in 1992.

How do cattle contract BSE?

Experts generally agree that BSE is most likely spread when cattle are fed meat and bone meal that contains brain or spinal cord from an infected animal, although recent atypical cases in the US suggest that more research is needed in this area.

In 1997, the FDA banned cattle feed from containing ruminant meat and bone meal. Farmers used to feed such meal to their cattle because it was an inexpensive source of protein and minerals and it improved animal production. Scientists believe it is unlikely that cow-to-calf transmission occurs. If maternal transmission does occur, it would occur late in the incubation period and the mother most likely would show clinical signs.

In 2010, researchers at Iowa State University found that cattle infected with mad cow disease seem to have glowing eyes caused by the buildup of lipofuscin, or colored waste material, in the retina. They hope the finding could pave the way for simple eye tests that could be used to accelerate the diagnosis of prion diseases and other neurological conditions in animals. 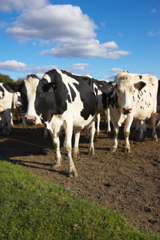 What is the incidence of BSE?

BSE had not been found in the United States until a cow imported from Canada tested positive for the brain-wasting illness in Washington State in December 2003. The nation's fourth case was reported in a central California dairy cow in April 2012. The animal was reportedly positive for atypical BSE, a very rare form of the disease not associated with infected feed. The cow did not enter the human food chain. Milk does not transmit BSE. Officials believe this latest case does not mean an increased risk in the threat of BSE, but, rather, an indication that industry safeguards are working.

Are there strains of BSE not related to infected feed?

Yes. Researchers reported two rare strains of BSE that are harder to detect and affect mainly older cattle. According to Thierry Baron of the French Food Safety Agency, the two cases of bovine spongiform encephalopathy found in US cattle in Texas and Alabama (US cases 2 and 3) came from a rare strain of BSE found largely in Europe. Art Davis, a US Department of Agriculture scientist for the Animal and Plant Health Inspection Service, said these test results showed completely different prion patterns than in the Washington cow diagnosed in 2003 (US case 1). Similar cases have been described in about a dozen cows in France, Italy and other European countries, as well as in Japan.

In June 2008, Canada confirmed its 13th case of the disease. At least three of the cases in Canada have involved animals that were infected after 1997, when a ban was instituted on the use of cattle parts in feed for cattle, or other ruminants such as sheep and goats. The Canadian cases and the 2003 Washington case (US case 1) resemble the classic British cases of the disease.

Does the disease pose a risk to humans?

Humans may contract variant Creutzfeldt-Jakob disease if they consume tissues from cattle which contain the disease-causing prions, specifically the brain or spinal cord. There is no cure for this disease, which was responsible for about 150 human deaths in Europe during the height of the outbreak.

In November 2009, it was reported that UK researchers linked a protein to the development of BSE and found a way to reduce it, a discovery that may lead to a treatment for the illness and its human form.

Is the food supply safe?

While the discovery of BSE in the US has increased public concern about the safety of meat, the USDA has stated that the food supply is safe. Milk and dairy products are considered universally safe; the transmission of BSE or its disease-causing prions through these products has never been demonstrated.

How is the public being protected?

Is my pet at risk?

While approximately 60 cats in Britain have contracted the related illness feline spongiform encephalopathy (FSE), the risk to your cat is considered to be extremely low. Due to a wide variety of feeding methods (table scraps to pet foods), it is not known how the cats contracted FSE. Dogs are not known to contract this disease.